It’s not hard to eat well in Glodok, Jakarta’s Chinatown and one of the oldest neighbourhoods in the bustling Indonesian capital. Designated as an enclave for Chinese residents by the Dutch East India Company in 1740, these days Glodok offers visitors a variety of Chinese, Indonesian and fusion dishes.

For a Chinese noodle breakfast, head to Gloria Alley – known as Gang Gloria in Indonesian – near the Pancoran Chinatown Point shopping mall as a starting point.

A foodie could spend a whole day – from breakfast to supper – eating and drinking to their heart’s content in the area. Here’s one possible itinerary:

For a Chinese noodle breakfast, head to Gloria Alley – known as Gang Gloria in Indonesian – near the Pancoran Chinatown Point shopping mall as a starting point.

Away from the alley, walk about 350 metres to Bakmi Ahong (Ahong Noodles), a hugely popular morning spot. Beside a canal, this humble noodle shop is crowded at breakfast time and hungry customers often share tables. The shop offers a variety of noodles, wheat or rice, which can be topped with steamed chicken (20,000 rupiah/US$1.40).

Some enthusiasts prefer pek cam kee – chicken that has been steamed for an hour with garlic and seasoned with shallots, pepper and salt, then garnished with sesame oil and salty soy sauce (90,000 rupiah).

Now 70 years old, he began helping his parents in the coffee shop when he was just nine, and took over in 1976. His brothers and sisters still help him with the day-to-day operations, from the procurement of raw materials to business expansion.

Tak Kie Iced Coffee has attracted customers young and old from all walks of life, including current Indonesian president Joko Widodo, who dropped by for an iced coffee when he was the governor of Jakarta in 2013.

The appeal of his coffee, Yunus says, is in the taste rather than the strength of the brew. “Sometimes when you drink coffee, you want it strong. I don’t offer that,” he says. “Why? If it’s strong, people can’t drink it.”

The beef soup made at Soto Betawi Nyonya Afung is a local dish of the native Orang Betawi, or “people of Batavia”, which was the original name of Jakarta.

Also in Gloria Alley, the cafe is open from 6am to 4pm daily and has been serving soto Betawi, or Betawi beef soup, since 1982. Influenced by Chinese, Arabic and European cuisines, Betawi soup is thickened with milk and coconut milk.

Made with beef marrow, beef shank and spices including bay leaves, lemongrass and galangal, the soup can also include potatoes, tomatoes, spring onions, and Indonesian crackers made of melinjo nuts.

Lunchtime diners can opt for cow’s lung, beef tongue, beef vein or a combination of all three in their soup, which is served with rice or a choice of noodles. A bowl with rice costs 45,000 rupiah, while soto Betawi with yellow noodles or rice noodles costs 48,000 rupiah.

“Everyone can eat Betawi soup,” says the cafe owner’s husband, who does not want to be named. “Muslims can eat it; Chinese also can have it.”

A cup of Chinese tea can be a delicious and thirst-quenching post-lunch beverage. About 300 metres from Soto Betawi Nyonya Afung is the Pantjoran Tea House at the historic south gate of Jakarta’s Old Town and Chinatown.

Built in 1900 to house a shop, it became a pharmacy in 1928 when Indonesia was still under Dutch colonial rule. In 2015, and it reopened as a teahouse after the Jakarta Old Town Revitalisation Corp renovated the attractive, historic building.

Open from 11am to 8pm during the week and from 7am to 9pm on weekends, the teahouse has become a popular sightseeing destination in Glodok.

AR Sukmana Hendra, the teahouse’s operations manager, claims it is the only place in Jakarta that still follows the Fujian-style tea ceremony that is becoming rare even in China.

“We’re encouraging or promoting it to make Indonesian people enjoy drinking tea,” he says, “because we know, in Jakarta, coffee shops are booming and mushrooming.”

Open from 7am until 9.30pm daily, the restaurant has a dedicated following among residents of Jakarta, who flock there for its Hainan chicken rice (58,000 rupiah).

The rice served here is soaked in chicken broth before being cooked over a charcoal fire for about an hour. Pandan leaves and salt are added during the cooking process to make the grains more fragrant.

Second-generation owner Anton Gotama took over the restaurant in 2010, after his parents had run it for nearly 40 years. “They asked me to continue it,” Gotama says, “so that it could be passed on to the next generation.”

This place is behind the Lindeteves Trade Centre (LTC) shopping mall, and 700 metres from Nasi Ayam Hainam Apollo.

Serving Chinese congee or rice porridge with assorted meats, it has become a local favourite for supper. Always crowded with couples, families and groups of friends, it’s open from 10.30am until 2.30pm, and reopens from 5.30pm to 12.30am for either dinner or a late supper.

Diner Devi Farrah Diah says the porridge is savoury and the saltiness is just right. “The porridge’s texture is rougher,” she adds. “It’s still tasty, and the meats are delicious, too.” 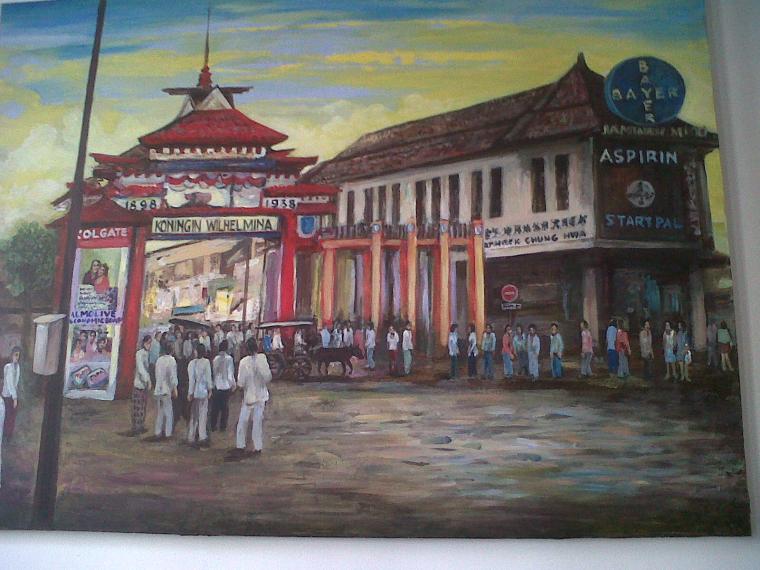 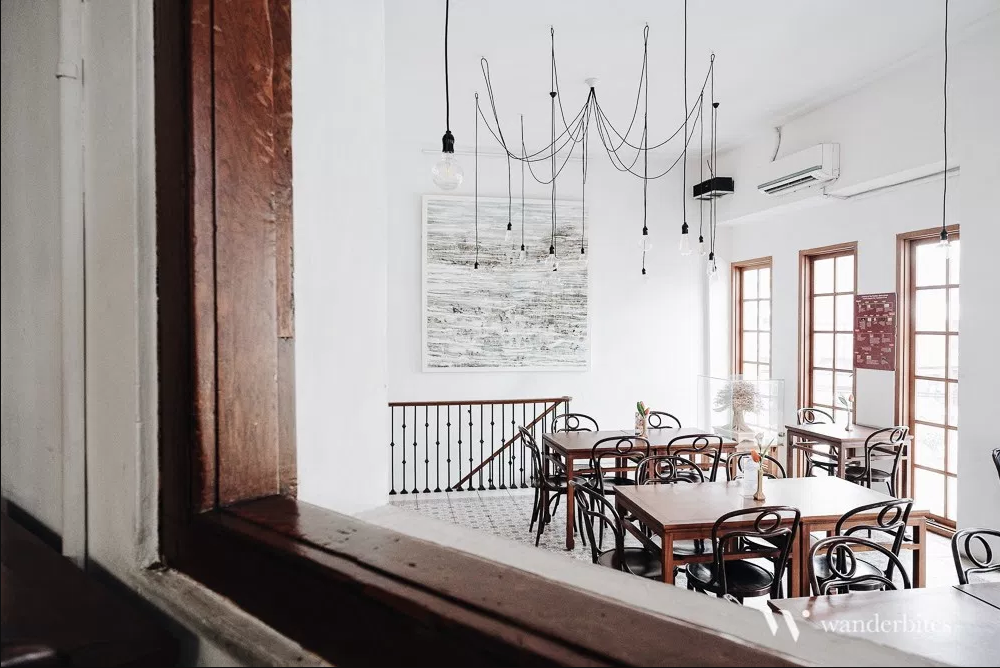 Back in 1663 when the Dutch still ruled the land and Jakarta was called Batavia, Kapitein Gan Djie and his wife used to offer tea for worn-out workers and merchants who passed in front of his office in the heart of Glodok. This simple act of kindness made tea an important part of Jakarta Old Town’s history. More than three hundred and fifty years later, Pantjoran Tea House was born.

The birth of Pantjoran Tea House is a part of the revitalization of Jakarta Old City, a joint task between Jakarta Old Town Revitalization Corp (JOTRC), the local government, and the Ministry of Education and Culture. This great effort aims to revive the historic area and make it into a distinctive attraction.

Pantjoran Tea House occupies the building that housed Jakarta’s oldest pharmacy: Apotheek Chung Hwa. The exterior of this two-story structure is kept intact, while the interior is arranged into a traditional Chinese shophouse. The big windows and the use of tegel kunci-style flooring adds to that vintage feeling, asking customers to time-travel for a while.

Despite its well-thought construction, one might say that Pantjoran Tea House relies too much on its historical values. A lot of things need more attention and work, such as limited parking space and the quality of food. There are indeed a couple of tasty dishes like Prawn with Salted Egg, but the variety of menu makes this tea house seem like just another Chinese restaurant. The intended specialty of this place, tea, also feels too generic.

Although the location and historical values are enough to invite both locals and tourists (at the time of our visit, there were two tables occupied by English-speaking tourists) for the first time, a restaurant’s survival eventually depends on food and service. At the end of the day, it is what will keep people coming back for more. In short, my eyes and minds were pampered well, but my taste buds still look for another reason to come back other than the Salted Egg Shrimp.

Perhaps Pantjoran Tea House could improve the quality of food and make the menu more interesting by incorporating dishes like “The Kapitein’s favorite”? After all, the establishment is still in its beginning and have room to be better. We wish Pantjoran Tea House the best of luck, hopefully they can write a beautiful story that lives up to Gan Djie’s tea legacy.